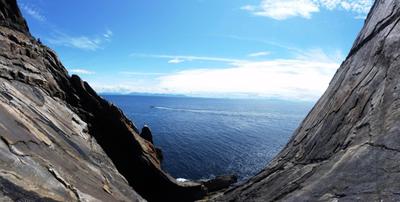 Base of Sail Rock
(click on thumbnail images to enlarge) 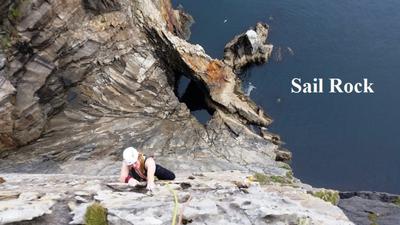 Living in the shadow of the mighty Slieve League sea cliffs and directly underneath the prominent Napoleonic watchtower to the headland to its east is one of Donegal's longest established coastal climbing venues, Sail Rock.

Sail rock is an 80 meter high quartzite sea cliff which forms the east facing wall of a huge scooped out amphitheater.

There are currently eight recorded rock climbs on the wall from a very amenable "Roaring Forties" at VS 4c to a very hard "Castaway" at E6 6b.

All the routes on the wall are excellent and well worth doing but it is the route called "Main Mast" at E2 5b/c which climbs the central fault of the wall which sees the most ascents by far and is regularly called "The Best Route In Ireland."

Most of the routes on the wall are climbed in three pitches but it is very easy to abseil in to the tops of the first pitches in the basalt band on all routes.

Access to the base of the wall is by abseil from the top out groove of Main Mast and requires a 100m abseil rope (best left in situ).

The base of Sail Rock acts as a huge nautical catchment feature and is prone to huge swells from South through to South West directions. A west to north sea motion is ideal, and a south.

If the base of the face is taking green, there are alternative climbing locations to both the north, east and west of Sail Rock at Skelpoonagh Bay, Malinbeg and Muckross Head.

Upon arrival it is always best to observe and predicted nautical action as the smooth base of the wall, blowhole and arch features allow huge and unpredictable waves to roll across the starts of all the routes on the wall.