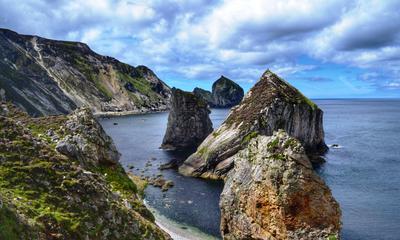 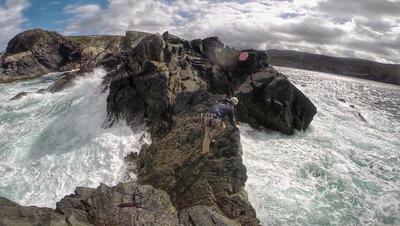 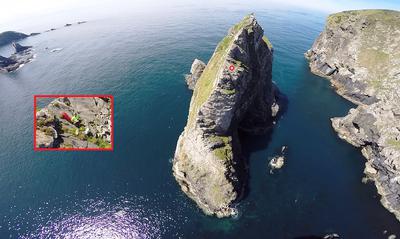 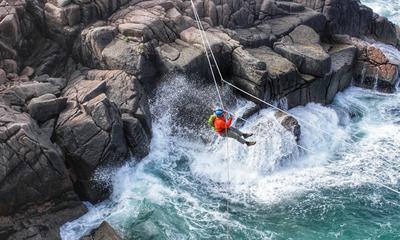 Tyrolean Traverse At An Port

Climb the highest of all Ireland's sea stacks, and a chain of others on the remote wild Atlantic coast at An Port, the most beautiful place in Ireland.

Access to these dramatic, challenging sea stacks is by a narrow, winding road which comes to an end right at An Port. Even the journey there is outstanding for its scenery. It's what lives to either side of this road end, though, that will leave you in total awe.

North Of An Port:

Traveling North from An Port, the sea cliffs and sea stacks just get bigger and bigger.

A little over half a kilometer's walk along the clifftop, northwards, takes you to a spot overlooking Toralaydan Island. Toralaydan is flanked by its own chain of sea stacks. One of these, the Baltic Spire, provides a super-scary ascent on its seaward face, in a super-terrifying location.

At a further half a kilometer North from Toralaydan lives An Bhuideal, an immaculate, iconic twin-headed stack. There are currently three routes to An Bhuideal's twin summits. All three are world class adventure rock climbs.

An Bhuideal's super-slim North tower provides an unforgettable ascent to its tiny, extremely exposed summit. The Rappel descent from this summit involves a wee bit of prayer as the Rap anchors are a pile of rocks and the landward face overhangs alarmingly in its upper half.

Traveling North by another kilometer along the clifftop takes you to a stunning viewpoint overlooking Tormore Island. At 150 meters above the ocean, Tormore is Ireland's highest sea stack.

Tormore Island stands guard at the 'nautical gates' to Slievetooey Mountain's extensive coastline that stretches off to the northeast. This huge, square-topped sea stack can be seen as far as 40 kilometers away, along the coast.

Access to Tormore begins with a monstrous, steep grassy descent from the clifftop, followed by a dramatic 20 meter abseil to a storm beach. From the storm beach, the stack is then reached by a 750 meter marine crossing.

To the south of Tormore Island is Cnoc na Mara, the sea stack that, when I first saw it, inspired me to climb every unclimbed sea stack in Donegal.

The 100 meter high Cnoc na Mara, with its impressive soaring 150 meter long landward arete, provides one of the most rewarding, adventurous rock climbs in Ireland. This sea stack represents all that is great about adventure climbing. It is easily an equal to the mighty Old Man of Hoy, off Scotland's Orkney Islands.

Access to Cnoc na Mara is a very involved affair and entails gaining the storm beach as for Tormore Island (see above). Gaining this storm beach is an adventurous undertaking in its own right. Cnoc na Mara seems to grow in height as you descend, reaching epic proportions as you near the beach.

The marine crossing from the beach to the base of the Cnoc na Mara stack is about 120 meters. The landward arete is climbed in four pitches, each one much more atmospheric than the last. The final pitch is an outstanding 58 meter ridge traverse, with 100 meters of air either side of you as you negotiate its short step sections.

South Of An Port:

A further chain of dramatic sea stacks lives to the south of An Port. Each one of these requires an increase in commitment to reach their bases. They span further and further away across the waves from the remote storm beach launch pad.

The skyline to the south of An Port is dominated by the massive sea ridge of the Sturral headland. This in itself is a challenging rock climb, requiring much more than rock climbing skill. One particular section of this ascent will live forever in your memory.