Mesolithic Age and other Stone Age artefacts from Donegal

Who Lived In Donegal Around 10,000 Years Ago?
Overview Of Mesolithic Age Communities: How They Arrived, Lifestyle, Tools They Made Soon After The Ice Age 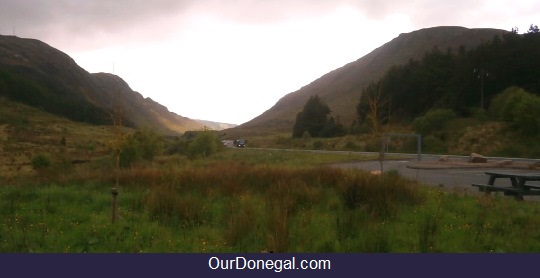 Barnesmore Gap in South Donegal was formed during the Ice Age

Ancient artifacts found in County Donegal, Ireland, have led archaeologists to conclude that humans lived in the county as far back as the Mesolithic Age.  That is, the Middle Stone Age - the pre history period that started soon after the Ice Age, and preceded the Neolithic Era.

By the time that great glacial thaw had occurred, Ireland was already colonized by vegetation, wildlife such as the giant elk, as well as the first known human arrivals.  The human population had reached several thousands.

Evidence Of The Mesolithic Age In Donegal

The past existence of Mesolithic (Middle Stone Age) settlements in Donegal is confirmed by the discovery of a variety of ancient microlithic artifacts (small stone tools) at several locations in the county.  For example...

Mesolithic microliths that precede 6,000 BC have been discovered near Castlefinn in East Donegal.

And an excavation of a Late Mesolithic Age site yielded a trove of microlithic debitage.  That is, small pieces of flint chippings discarded in the making of Stone Age tools.  Geologists concluded that a tool production industry had existed at the site, and that the tools were created for the purpose of trading with neighboring communities.  The artifacts were discovered at Dunaff Bay on the Inishowen peninsula in Northeast Donegal.

Tools Made From Stone 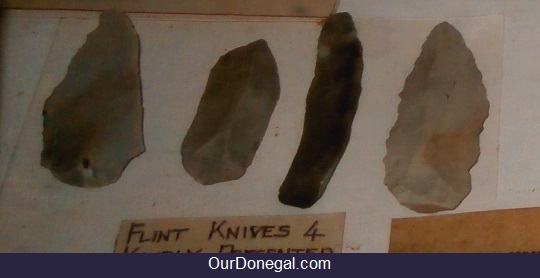 Donegal's earliest humans fashioned arrowheads and sharp blades out of flint or quartz.

These Middle Stone Age implements were needed for hunting wild animals and preparing them for cooking.

Plus they were useful in the removing of skins for use as clothing  and shelter.

The tools also helped defend against attack by wolves and other predators from the dense forests.

Donegal's earliest-known settlers had journeyed here either by boat, or by crossing a possible natural 'land bridge' via Britain.  It is possible that they arrived by sea, river, and/or land, crossing Ireland from the east or southeast.

Their Way Of Life 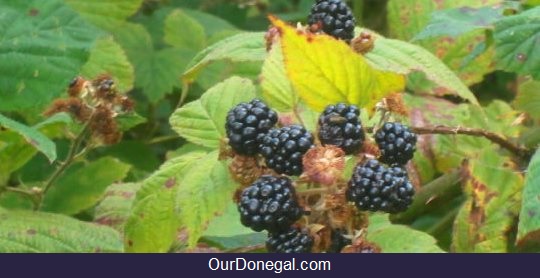 It is known that the primitive peoples of this era had a preference for coastal locations.  They also favored lake shores as well as the banks of larger rivers.  Rivers facilitated transportation and provided natural travel routes through the lush vegetation.

Mesolithic people were hunter-gatherers.  They ate well living on such culinary delicacies as wild boar, various species of wildfowl, seafood and a variety of fruit, nuts and berries.  They knew how to create and use fire, and cooked their food outdoors.

These early residents also built and lived in primitive dwellings.  The dwellings were made from a combination of native materials that may have included wood, earth, and animal hide.  Evidence of this has been unearthed at the Mountsandel archaeological site across the border in Northern Ireland.   The Mountsandel site is approximately sixty kilometers east of County Donegal, near the river Bann.

Where To View Stone Age Artifacts In Donegal

You can view the Stone Age artifacts pictured above in the County Donegal Historical Society's museum room at the Franciscan Friary in Rossnowlagh. 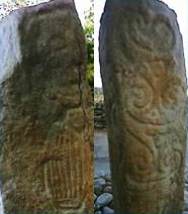 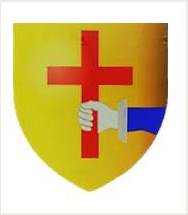 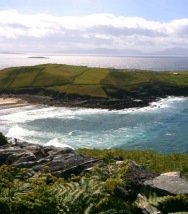 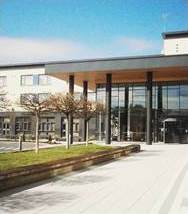