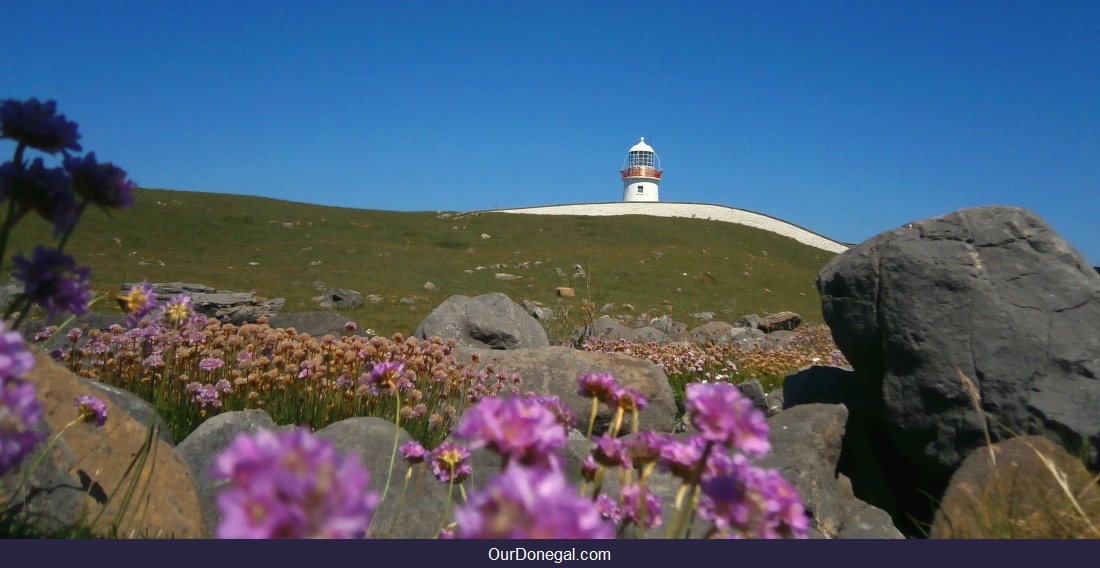 Discover Saint Johns Point Donegal
A Unique Blend Of Celtic Heritage, Nature And The 'Great Outdoors' Awaits You On This Remote, Scenic Peninsula 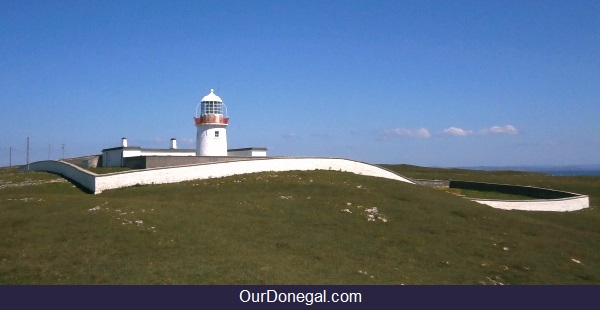 If you long to 'escape' for a while, this remote, ten kilometer-long peninsula could be a dream destination for you.

The narrow peninsula slices through the deep-blue waters of the Atlantic Ocean at Donegal Bay, punctuated by the villages of Bruckless and Dunkineely at one end and a pretty nineteenth century lighthouse at the other.  In between, numerous coastal panoramas and other delightful attractions are waiting for you to find and enjoy.

Saint Johns Point Donegal is a favorite of fishermen, divers and walkers, as well as lovers of nature, Celtic heritage and geology... 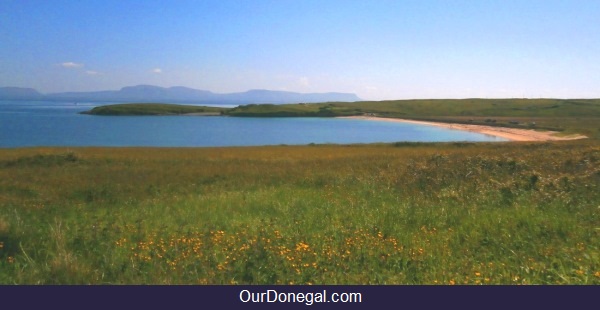 As you travel the length of this idyllic peninsula, your eyes are treated to a feast of sheer coastal Atlantic beauty, flora, fauna and unique geology.

You're never far from the ocean here.

In fact, at times the road runs so close as to be almost in the lapping waters of Mac Sweeney's Bay.

The peninsula is an ideal destination if you enjoy scenic drives, walks, cycles and picnics on a secluded beach.

On a clear day you're treated to magnificent coastal views as you travel the length of the peninsula. 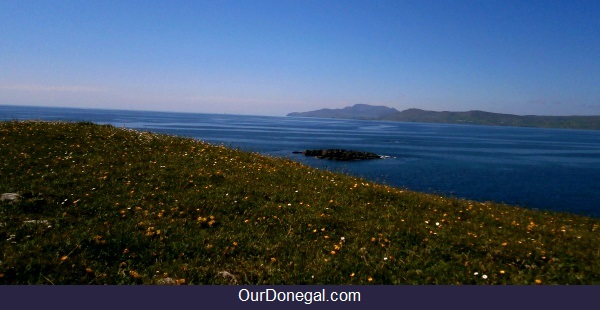 Carntullagh Head at the mouth of Killybegs harbor, as well as Drumanoo Head, Muckross Head, and distant Slieve League on the southern shores of Donegal come into view.

To the southwest is the vast Atlantic Ocean as far as the eye can see, glistening as if it was sprinkled with a million diamonds.

Passing the golden sandy shores of the sweet little sheltered cove at Coral Beach, towards Saint John's Point and lighthouse at the very end, the spectacular scenery continues across Donegal Bay.

Saint Johns Point Donegal has distinctive karst geological rock formations.  You can see them clearly in certain places along the shoreline near the road, and also beyond the lighthouse.

Look for a variety of plant life throughout the peninsula, such as bird's-foot trefoil, as well as wild roses and vetch among the hedgerows and beyond Coral Beach.  The pretty little sea pinks, for example, love to colonize the rocky karst formations .

The peninsula is also abundant in wildlife, particularly birds and marine life.

Considering its size, this little peninsula holds a surprising wealth of Celtic heritage that spans millennia.  It includes... 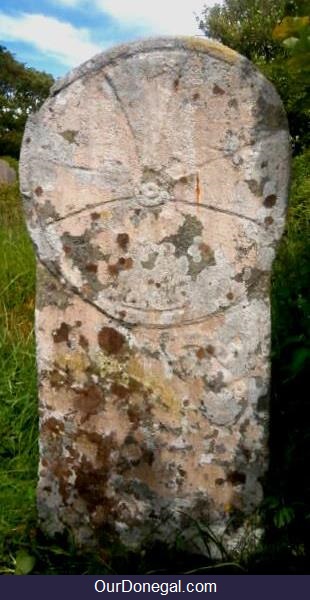 The Killaghtee Cross is a significant piece of Ireland's Celtic heritage.  This early Irish Celtic cross was a precursor to the elaborately crafted Celtic High Crosses, for which Ireland became famous with the adoption of Celtic Christianity.

Saint Aédh was an early Irish Christian Bishop and reputed miracle worker.  His royal lineage was of the powerful Celtic High King of Ireland, Niall of the Nine Hostages.

The Killaghtee Cross is located in a small, ancient graveyard in the Northwest of St. John's Point peninsula.  The saint is believed to have established a monastic site there.  The descriptive Celtic meaning hidden within the anglicized name of the locality -  'Killaghtee',  seems to support that claim...

The name 'Killaghtee' comes from 'Cill Leacht Aédh', the locality's original name, in the Celtic language of Gaelige.  It means 'church and tomb of Aédh'.

The Killaghtee Cross is inscribed with a large Maltese-style cross.

Just beneath the Maltese cross, to the right, is a Celtic Trinity knot, one of the best known Irish Celtic symbols.  The Trinity knot Celtic symbol is associated with Saint Brigid, one of Ireland's three patron saints along with Saint Patrick, and Saint Columba of Iona Scotland who was born in Donegal.

Wedge tombs are believed to date from the late Neolithic to mid Bronze Age, and are approximately 4,000 to 4,500 years old. 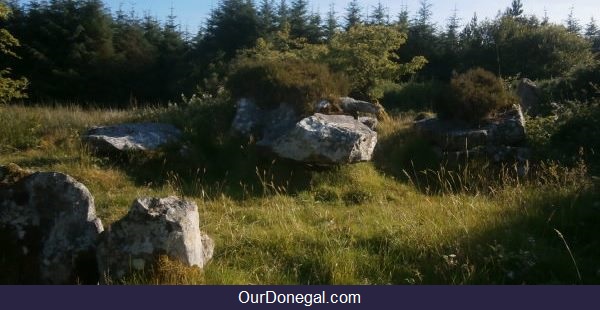 This type of tomb usually contains only one solitary burial chamber (gallery).  However, the wedge tomb just north of Saint John's Point peninsula contains a total of three burial chambers.

It is the only triple wedge tomb known to exist.

The tomb was originally covered by a mound of stones called a 'cairn'.  Several of the cairn's kerbstones are still in place.

This pre history tomb is well concealed in woodland behind a small car park, about one and a half kilometers North of Dunkineely village. 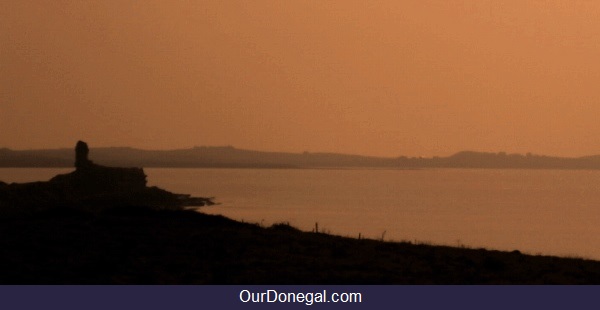 In addition to the above, you can also find... 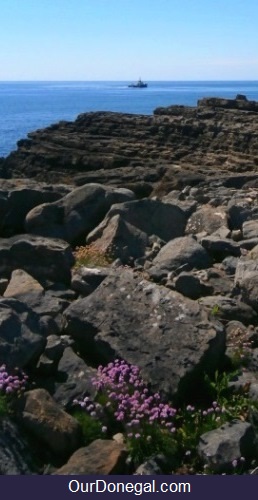 St. Johns Point Donegal is considered one of the best locations for shore diving in Ireland, providing excellent visibility with plenty of marine life to explore.  The favored diving spot is at the steps near the lighthouse.

Mackerel, wrasse, pollock and conger are abundant.  Favorite spots for fishing are...

If you like boat and ship spotting, Saint John's Point is a great location to enjoy watching the various fishing boats, trawlers, cruise ships and other marine traffic on their journeys to and from Killybegs harbor.

You can get an hour-long overview of Saint John's Point peninsula and Killybegs fishing port on the new sightseeing tour 'Hidden Delights Of Killybegs'.