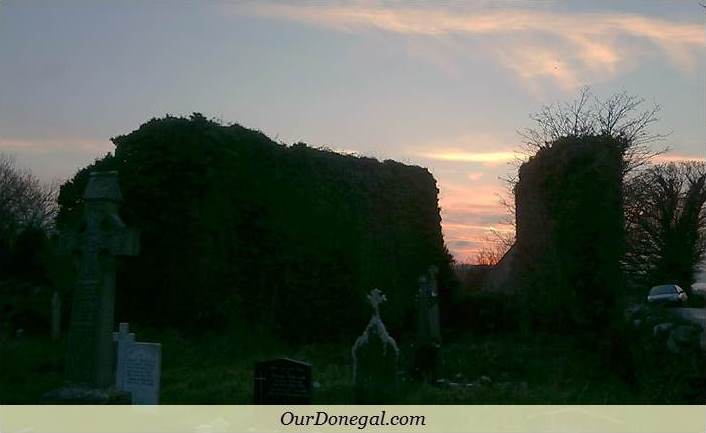 Ballyshannon on the Erne estuary has a fascinating and diverse history, as well as a rich Celtic heritage.  This picturesque town,  which was the home of the first Celts to arrive in Ireland, is less than 10 kilometers from Bundoran beach resort.

Right on the outskirts of Ballyshannon, in the direction of Rossnowlagh, you'll find a small cluster of historic Celtic sites at the idyllic ruins of Abbey Assaroe.  In fact, you could reach these sites on foot from the town center, if you were feeling energetic...

This abbey, which overlooks the scenic Erne estuary, was founded in 1184 by a group of Cistercian monks from Boyle Abbey, in County Roscommon.  It was granted to them by Flaherty O'Muldory of the Celtic O'Muldory dynasty, rulers of Tirconnell before the O'Donnells came to power.

'Tírconnell' is the ancient Celtic name for much of today's Donegal County, which was originally the territory of King Conall Gulban.

This son of Celtic High King of Ireland, Niall of the Nine Hostages, was the ancestor of the powerful O'Donnell dynasty, which was later connected with Donegal Castle and Donegal Abbey.

King Conall was also ancestor to the O'Muldory dynasty.

Today, only the west and south walls of the nave survive.

Look for ornately carved stones from the abbey built into the graveyard walls, scattered around the grounds, and at the nearby Abbey Mills (skip down to Mills).

Among the earliest known burials in the abbey grounds are...

Donal Mor Mac Eighneachain was King of Tirconnell from 1207 until his death in 1241.  The O'Donnell surname of his descendants originated from him.  He became a Cistercian monk at Abbey Assaroe in his later life. 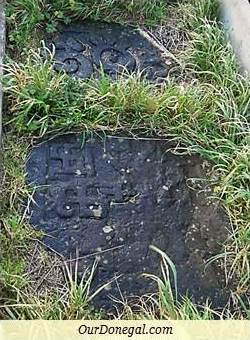 The following related attractions are all within a short walk of the abbey...

The Abbey Well is known locally as 'Tobar na Bachaille', which means 'Well of the Crozier' in the Celtic language of Gaelige (Irish).

The well is historically associated with the three saints, Patrick, Columba, and Barron of Kilbarron.

The name 'Tobar na Bachaille' refers to the occurrence of an early Celtic Christian miracle at this site.

The miracle is said to have occurred when the crozier of either Saint Barron or Saint Columba, previously left at a distant location, was caused to materialize out of nearby rock by one of the saints.  The origin of the well is attributed to that event.

This lovely well is located right on the shore of the scenic Erne estuary, that empties into Donegal Bay and the wild Atlantic ocean beyond. 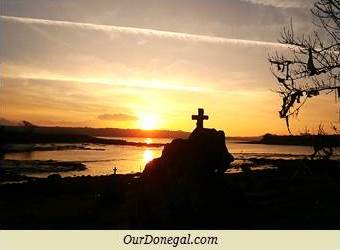 Sunset at Abbey Well and the Erne Estuary

This walk will lead you to a small but historic, grotto-like cave associated with Saint Patrick.

See the humble improvised stone altar on which Mass was later celebrated in secret, attended by local Celtic families, under the 'Penal Laws'.

The tyrannical 'Penal Laws' were imposed throughout Ireland by foreign occupying forces.

The penalty for Catholic priests caught celebrating Mass during those oppressive years was death.

A stone carving of a monk's head, found in the vicinity of this cave, is now on display in the Donegal Historical Society's museum room, at the Franciscan friary in Rossnowlagh.  It is believed to be from Abbey Assaroe.

Rossnowlagh is within 20 kilometers of Bundoran Co Donegal.  Travel northwards from Ballyshannon, along the R231, passing near the ruins of Kilbarron Castle and Kilbarron Church, to get there. 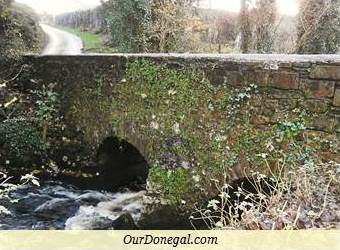 In addition to those mentioned above, the following two attractions are also just a short walk from Abbey Assaroe, on the outskirts of Ballyshannon...

This pretty little Bridge is one of the oldest in Ireland, believed to have been built by the Cistercian friars.

Water power was originally introduced into this area by the Cistercians.

These lovely old corn and flax mills, complete with waterwheels, were recently restored.

See stone carvings from Abbey Assaroe in the courtyard.

The museum, crafts and coffee shop are open on Sunday afternoons between Easter and October.

Stop by, and have a relaxing 'cuppa' while you're there... if you walked from Ballyshannon town, you might be glad of it!