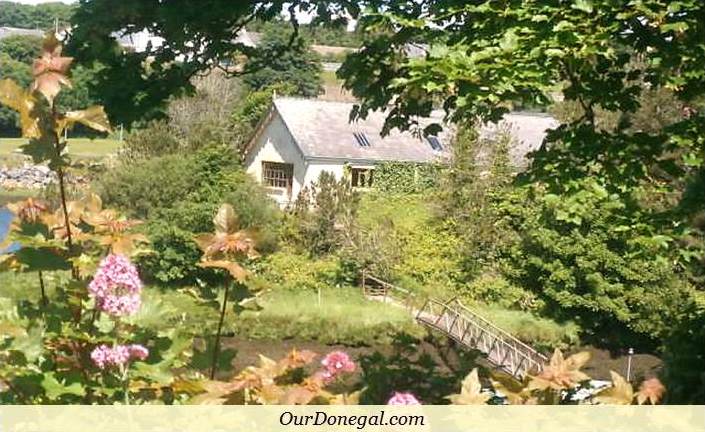 The Green Lady.  Dracula.  Frankenstein.  What do they have in common?

Ok, you might think of a few creepy similarities.  But did you know they all have links with the Celtic town of Ballyshannon, which is less than 10 kilometers from Bundoran?

Find out about these, and other fascinating facts about this diversely historic town where the first Celts to arrive in Ireland made their home... and yes, we'll tell you about that mysterious Green Lady, too!

While visiting Ballyshannon, you might also enjoy the cluster of historic Celtic sites at Abbey Assaroe (Bundoran Day Trips Part Three), on the outskirts of town.

The best way to discover heritage-rich Ballyshannon is on foot, so let's go...

Inis Saimer of the Celts

Stroll to the Mall quay, at the mouth of the scenic Erne estuary, for a good view of Inis Saimer.  The tiny island where the first Celtic tribe to arrive in Ireland, the Partholon, first settled is just a 'stone's throw' from this spot.

The Ballyshannon and District Museum has fascinating artifacts, and information, relating to key stages of the locality's history and pre history. 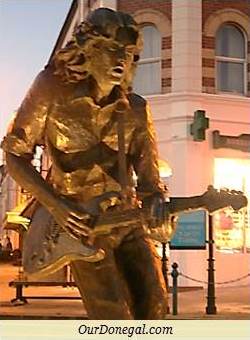 The Ballyshannon famine workhouse, built in 1842, serves as a stark reminder of a profoundly tragic period in the history of Celtic Ireland.

In later years, part of the workhouse was used as a hospital.

The famous guitar legend, Rory Gallagher was born there.

Enjoy an early lunch, or tea in the delightful old-world atmosphere of Dorrian's Imperial Hotel.  This friendly family-run hotel, in the heart of town, was built in 1781.  While you're there, ask about local walks with historic interest.

Ballyshannon is a terrific vacation destination in its own right.

In fact historic Ballyshannon and the beach resort of Bundoran Co Donegal complement each other well with their combined attractions and hospitality options.

The Celtic heritage-rich Abbey Assaroe area and scenic Creevy coastal walk are all near Ballyshannon, as are excellent beaches at Bundoran, Rossnowlagh and Murvagh, plus golf, fishing and more.

This is the ancient burial site of a Gaelic, Celtic High King of Ireland.  He died in 667BC.  The megalithic tomb that once graced the High King's hilltop resting place was demolished by occupying forces in 1798.

Today, St. Anne's Church of Ireland and adjoining graveyard are located there.

This is where you'll find the grave of poet William Allingham (1824-1889), who was born in Ballyshannon.  He is best known for his poem 'The Faeries'.  Interestingly, the 'shee' in 'Mullaghnashee' is the anglicized version of 'sí', the Gaelige (Irish) word for... yes, you guessed it, 'fairies'!

The historic Mullaghnashee hilltop is also where Saint Patrick prophesied to King Conall Gulban that one of his descendants would be a sage, a prophet and a poet.  Saint Patrick was referring to Saint Columba (St. Colmcille) of Iona Scotland, who was born in Gartan near Letterkenny, the great grandson of King Conall.

Saint Columba was therefore of the highest ancient Gaelic Celtic royal lineage through King Conall's father, Niall of the Nine Hostages.  The saint was a kinsman of the O'Donnell chieftains connected with Donegal Castle and Donegal Abbey, who were also descended from King Conall Gulban.

So now you're wondering where 'Dracula' and 'Frankenstein' fit in... Right?

The grandparents of Bram Stoker, author of 'Dracula' were married in the aforementioned St. Anne's Church on Mullaghnashee, in 1817.

And Elizabeth Dixon, the grandmother of Mary Shelley who wrote 'Frankenstein', lived at Main Street Ballyshannon.

The 'Green Lady' was the wife of a British officer in the occupying forces.  She is said to have been killed in Ballyshannon's British military barracks of 1700, and continues to haunt the building to this day.

However, it seems she may not have exclusive 'haunting privileges'...

The Scottish writer Sir Walter Scott wrote about the bizarre ghost of a child, as witnessed by Robert Stewart, the then future Viscount Castlereagh and British statesman, in 1793.

Later on, enjoy an evening of Celtic Irish music in Dorian's thatched bar.  No ghosts here, that we know of...  just occasional high spirits!