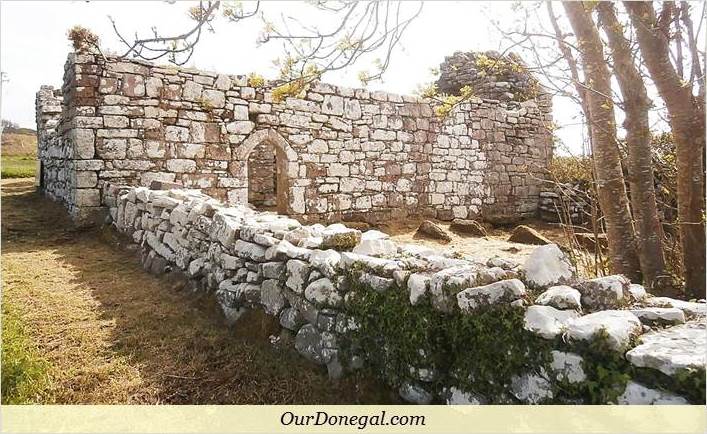 Looking at the pretty, Celtic ruins of serene Kilbarron Church and its adjoining graveyard, you'd never guess the wonderful history they hold.

Kilbarron Church is located between historic Ballyshannon town and Rossnowlagh Beach, on the R231.  See Bundoran Co Donegal Day Trips Parts One, Two, Three, Five and Six for other attractions nearby.

The 13th or early 14th century ruins of Kilbarron Church and graveyard are located on the site of a former, 6th century, early Celtic Christian monastery.  The monastery was founded by Saint Barron with the help of his cousin, Saint Columba (St. Colmcille) of Iona Scotland.

'Killbarron' is an anglicized version of 'Cill Bairrfhionn', which means 'Church of the Fair-headed one', i.e. St. Barron's church, in Gaelige (Irish). 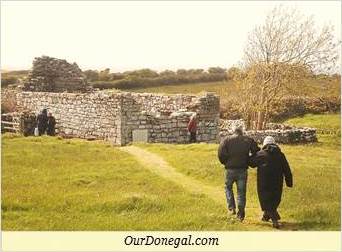 Saint Columba, one of the three patron saints of Ireland along with Saints Patrick and Bridget, was a Donegal saint.  He visited Saint Barron at this site, and also at Abbey Well, near Abbey Assaroe.  Both Abbey Assaroe and the Abbey Well are roughly five kilometers southeast of Kilbarron Church.

Saint Barron, who was both an Abbot and a Bishop as well as a disciple of Saint Columba, is believed to be buried here.

Both Saint Barron and Saint Columba were of the highest ancient Gaelic Celtic royal lineage.  They were great, great grandsons of High King of Ireland, Niall of the nine hostages.  They were also kinsmen of the great O'Donnell chieftains.

In addition, Saint Barron (alternative spelling Barindan or Barrind) is believed to have been a kinsman and contemporary of another one of Ireland's great Celtic saints, Brendan the Navigator.

Before he became a bishop, Saint Barron appears to have preceded both Saint Brendan and Christopher Columbus as "the first European discoverer of the American continent".  According to 'Lives of the Irish Saints', Kilbarron was the departure point of the saint's pioneering journey...

"... it's related in the Acts of St. Brendan, there was a Father Barrindan, who had informed that celebrated navigator, about his own wonderful adventures, while away from Ireland on the great ocean.  It is supposed, too, that from Kilbarron, in conjunction with his disciple, Mernoc, St. Barrind sailed off in search of a great western island.  This he is supposed to have found, when he landed on the shores of the American continent.  They travelled for fifteen days, before reaching the end of it.  Moreover, it is said, that he returned to Ireland, when the glowing descriptions he gave of that distant region induced St. Brendan the Navigator to adventure in the same direction."

Other authors have written that Saint Barron walked inland towards the west for fifteen days without seeing any end to the land ahead.