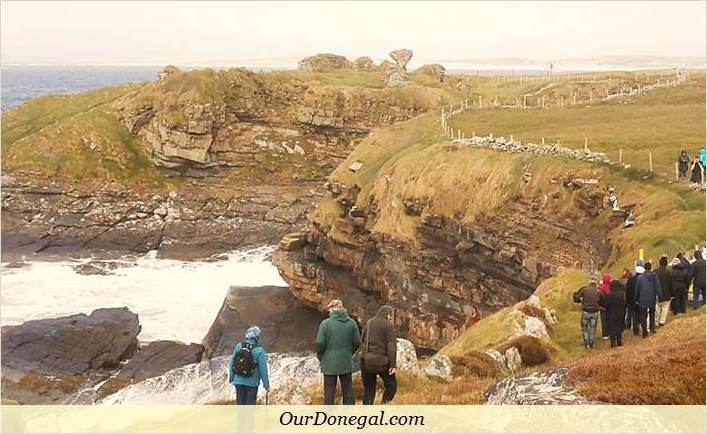 The scant remaining ruins of Kilbarron Castle teeter high on a windswept, Atlantic pounded cliff-top overlooking Donegal Bay.  Bleak and forlorn today, they give little indication of the remarkable treasure-trove of dramatic Celtic history they hold...

Kilbarron Castle was apparently built by the Celtic O'Scingin clan at the end of the twelfth century, or beginning of the thirteenth.

The O'Scingins moved to Kilbarron from near Boyle in County Roscommon at that time.  They had been appointed as Ollamhs to the first of the powerful dynasty of O'Donnell rulers of Tirconnell.

'Ollamh' is the Gaelige (Irish) word for 'Professor'.

These learned specialists were employed by Gaelic Celtic chieftains and kings to record their royal clans' history.

The position of Ollamh was hereditary, and highly prestigious.

The castle appears to have been built on the site of a former ancient Celtic promontory fort, about two kilometers west of Kilbarron Church.

That coastal military defense post dates back to the Iron Age.

Towards the end of the fourteenth century, Matthew O'Scingin was the latest of the O'Scingin hereditary Ollamhs to the O'Donnells.

The Ollamh's only son, Giolla Bríde O'Scingin, had been killed in battle in 1382, leaving no-one to continue this line of Ollamhs.

However Cormac O'Cleary (Ó'Cléirigh), a Celtic lawyer, married Matthew O'Scingin's only daughter.  They had a son called Giolla Bríde O'Cleary, who would succeed his learned grandfather as the next hereditary Ollamh to the O'Donnells.

Meanwhile, in 1390 Kilbarron Castle had been demolished in a feud.  It was rebuilt by the O'Clearys, who added a tower house and several other buildings.

Matthew O'Scingin's grandson,Giolla Bríde O'Cleary, was the first of generations of illustrious O'Cleary Ollamhs, historians and poets.  Some would make notable contributions to the culture and history of Ireland.  Several would leave a profound legacy for Celtic Ireland and the world, and one heroic descendant would risk life and limb to do so. 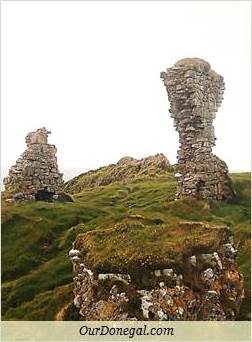 Dermot of the Three Schools

Dermot O'Cleary was Giolla Bríde O'Cleary's grandson.  He founded three schools at Kilbarron Castle in 1442, and the castle became a renowned seat of academic learning for Language and Literature, the Chronicling of History, and Poetry.

Lughaidh Ó'Cléirigh was the last hereditary Ollamh to the O'Donnell chieftains, before the foreign occupying crown forces took total control of Ireland.  The Ollamh lost his inherited Kilbarron Castle and estate to those forces in c.1610.

This eminent historian, poet and scholar wrote 'Beatha Aodha Ruaidh Uí Dhómhnaill' ('The Life of Red Hugh O'Donnell').  The manuscript was a biography of the valiant Celtic Chieftain Red Hugh O'Donnell II, who had died in Spain in 1602.

Here's how one Irish-American researcher, an O'Cleary descendant, described that biography...

"The life of Aodh Ruadh O Domhnaill is a masterpiece of Renaissance biography.  Its author was a member of a royal household, and trusted confidant of its subject; its language is the Classical Irish of the professional poets; and its perspective that of a native Irish aristocrat.  It lives on, illuminating Gaelic Ireland's history, language, literature and culture."

'O'Cleary's Life of O'Donnell: its preservation and rediscovery' by Patrick B. Clark

Update:  This fine article used to be at www.academia.edu.  It is no longer there, so we have removed the link.

You can view an English translation of Lughaidh O'Cléirighs 'The Life of Red Hugh O'Donnell' in the museum room at nearby Rossnowlagh friary.

The learned Franciscan Brother, Mícheál Ó'Cléirigh (Michael O'Cleary) led the team of four historians who wrote the 'Annals of the Kingdom of Ireland'.  The manuscript, completed in 1636, became known as 'The Annals of the Four Masters'.

Prior to writing the 'Annals of the Kingdom of Ireland', this heroic friar risked his life traveling throughout occupied Ireland collecting the necessary facts.

Cúchoigríche O'Cléirigh, a cousin of Br. Mícheál Ó'Cléirigh, was one of the Four Masters who wrote 'The Annals of the Kingdom of Ireland'.

The castle is thought to have been destroyed in the rebellion of 1641 when the Irish took a stand against their foreign oppressors.

Today the Kilbarron Castle Conservation Group is working to protect the remaining ruins of this historic castle.

The dedicated researchers at the Mícheál Ó'Cléirigh School are doing a fine job unearthing the beautiful Gaelic Celtic history related to Kilbarron Castle.  This article is enriched, thanks to their work.