Take a short drive inland to Mullinaleck Bridge to view a historic monument over the river Drowes, commemorating four remarkable Celtic heroes of the seventeenth century (NB See Important Update below, before you go there).

Both of these attractions, like many of the others featured in this six-part series, are within easy reach of Bundoran Co Donegal.  You could easily tie them in with trips to Ballyshannon, Rossnowlagh beach and friary, or the historic ruins of Abbey Assaroe, Kilbarron Church and cliff-top Kilbarron Castle...

Within 15 Kilometers of Bundoran Co Donegal 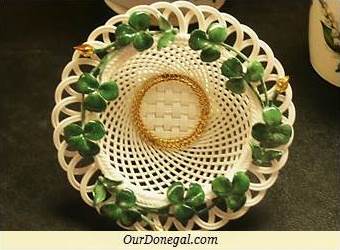 If you like fine chinaware, you'll love visiting this unique pottery workshop in Cloghore, South Donegal.  Cloghore is just west of the pretty Northern Ireland village of Belleek.

Every piece is meticulously master-crafted, decorated and painted by hand, right in their workshop, by the Celtic Daly family.  The collection can also be viewed on their website, www.celticweavechina.com/shop.

Within 5 Kilometers of Bundoran Co Donegal

This monument was recently removed and the bridge is closed due to flood damage.

This monument by James McKenna is on Mullinaleck Bridge, on the boundary between Counties Donegal and Leitrim.  It overlooks the popular fishing river Drowes which, further on, empties into Donegal Bay just south of Bundoran Beach Resort.

Legacy of the Four Masters

The monument commemorates a group of heroic Celtic authors known as The Four Masters, for the remarkable legacy they left for humanity. 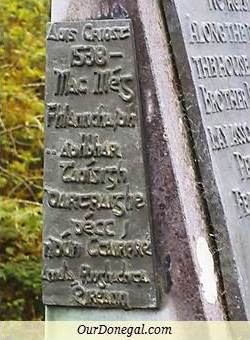 The Four Masters were...

Brother Michael collected those records in grave danger to his own life knowing that the ancient manuscripts, and the precious knowledge they contained, would soon be destroyed under hostile foreign occupation.

Then, from 1632 to 1636, Brother Michael O'Cleary, together with the other three Masters, laboriously transcribed those ancient Celtic records. 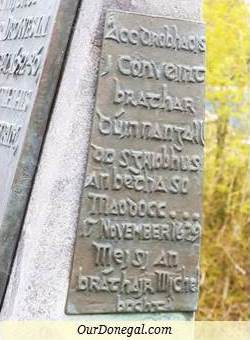 They worked at Franciscan refuges at Lough Eske, and near the river Drowes because the Franciscan abbey at Donegal Town had already been destroyed in 1601.  From 1610 the abbey ruins were in the possession of English captain Basil Brooke, and his son Sir Henry Vaughan Brooke from 1633.  Captain Brooke had used the scattered stones of the friary to build his new mansion at Donegal Castle.

Once completed, the annals were then shipped to another Franciscan refuge in Louvain in Belgium for safekeeping.  That's where the popular title, 'The Annals of the Four Masters', originated.

Failing the timely action of those four Celtic heroes, future generations would have been denied key knowledge of their awesome Celtic roots, forever.

Where to See the Annals

Thanks to the success of that courageous mission, you can see a copy of 'The Annals of the Kingdom of Ireland' in the museum room at Rossnowlagh Friary.  Rossnowlagh is less than twenty kilometers from Bundoran Co Donegal.