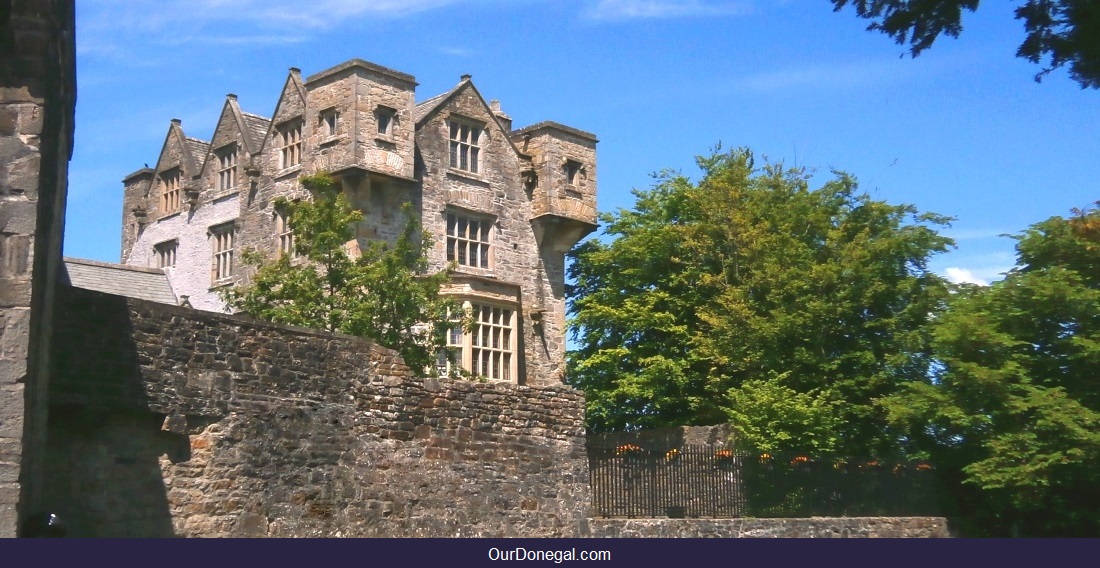 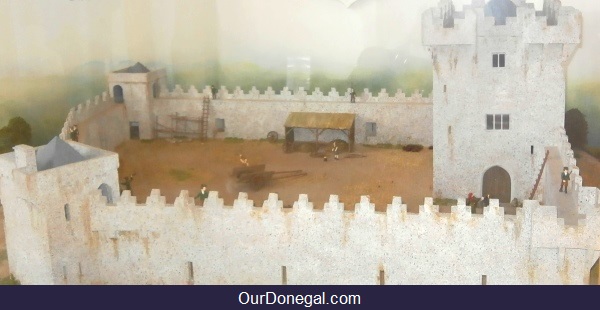 3D impression of how the castle may have originally looked. On view in restored castle

In the turbulent centuries since 1601, the castle was burned, then refurbished and extended, then fell into disrepair and became derelict.

More recently, the popular landmark has undergone extensive restoration and is open for public viewing.

So who built this historic castle?  What was so special about its location?  Is it even possible to discover what it was like originally?  Let's find out... 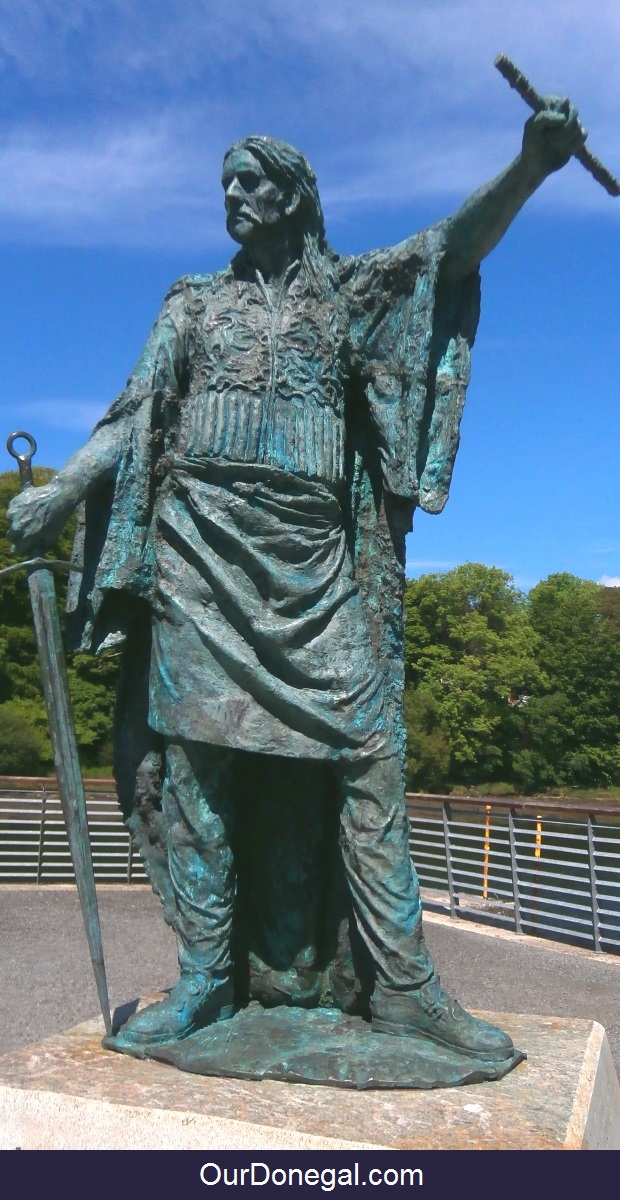 The O'Donnell Castle Donegal Town was built by Red Hugh O'Donnell the First in 1474, the same year as the nearby historic Donegal Abbey.

Known locally as Donegal Castle, it served as a main residence and stronghold for a succession of O'Donnell Chieftains and their families, for over a century and a quarter.

According to English Crown records, the castle in its original state was the largest, most strongly fortified of all Ireland's Gaelic Celtic castles.

This castle was built in the form of a tall, towering keep.

Red Hugh O'Donnell The First was a hereditary Gaelic Celtic Chieftain of Tirconnell.

A descendant of Heremon the first Gaelic Celtic High King of Ireland, Red Hugh I was of the highest ancient, royal Gaelic pedigree.

Red Hugh's royal lineage was through Niall of the Nine Hostages and Niall's son Conall Gulban.

The O'Donnell Chieftain was related to Saint Columba of Iona Scotland through Conall Gulban.  Also known as Saint Colmcille, this great saint is one of Ireland's three patron saints, along with Saints Patrick and Bridget.  Saint Columba was born in Gartan, near Letterkenny.

The great O'Donnell Chieftain died in his Donegal Castle in 1505 and was placed in his vault at Donegal Abbey.

O'Donnell Castle Donegal Town was built in a rectangular shape, with an entrance at ground-level facing Southeast.  A slightly wider, tapering base with added buttressing to the north and northeast, gave extra fortification while providing greater structural support for the upper levels.

The castle would have been built tall enough to command long-range views in every direction, from the Eske estuary and Donegal Bay to the southwest, as far as the Bluestack mountains and Barnesmore Gap to the north. 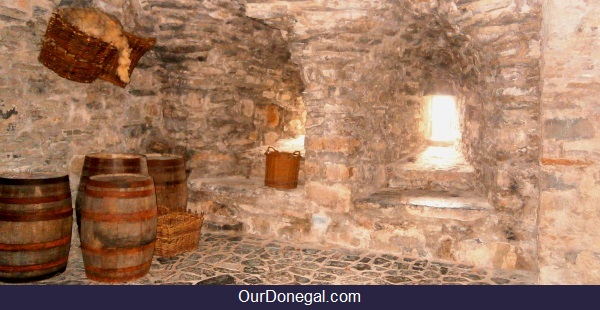 The ground-level stone floors and walls are among the surviving original features of O'Donnell's Castle Donegal.

The original stone-built domed ceilings at ground-level, and a unique original spiral stairway strategically designed for defense have also survived.

A new, separate tower building was added c. 1563, of which only the foundation remains today.

Insights from an Old Celtic Poem...

The following extracts from an old Celtic poem give a little insight into what the O'Donnell Castle Donegal Town looked like originally, before it was damaged, and the extent of its views out to sea.

The Bard (Celtic Poet) Speaks to the Castle...

"From thee have we beheld - delightful sight - from the high pinnacles of thy royal turrets,
long lines of ships at the approach of May, with masts and snow-white sails"

From the Bardic poem "Address to the Ruins of Donegal Castle" by Malmurry Mac an Bhaird c.1601
(Translated to English, published in the 'Irish Penny Journal' of December 12th 1840)

The O'Donnell Castle Donegal Town was built on the shores of the river Eske, on a curve, just where the river meets the head of Donegal Bay, at the scenic Eske estuary.  That was a highly strategic location in a number of ways... 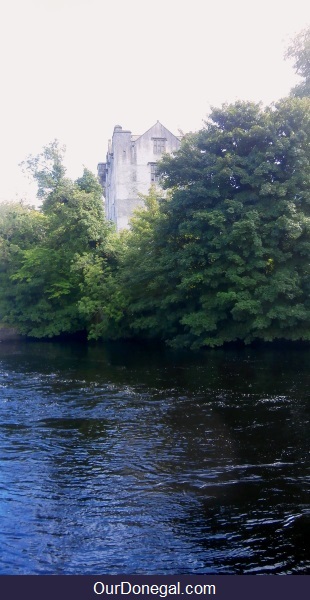 From a defense point of view, it was ideal.  The river served as a natural moat to the west, north, and northeast.

In the event of a security breach, it would have been easy to escape the castle up or down river, as well as by land.

The river provided the castle kitchen with a constant supply of salmon and other fish. Eske is an anglicized version of the Gaelic word 'iasc', which means 'fish'.  This river was so-called for its abundance of fish.

Donegal Town was a bustling, vibrant center of two-way international commerce, which the Chieftain controlled from his castle.

Spanish galleons and other foreign ships delivered cargoes such as leather, wool, cloth and wine to the nearby wharf.  Those were exchanged for Atlantic fish and other local wares, which were then shipped to Belgium for North European distribution.

Europeans called the O'Donnells 'Kings of the Fish'!